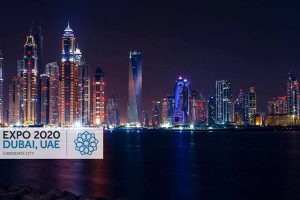 Dubai Expo 2010 will be the first World Expo in the Middle East. When it was announced in 2013, this big news was celebrated with fireworks from the Burj Khalifa, which makes obvious the importance of this future prospect for Dubai. It will take place from 20 October 2020 to 21 April 2021, and as organizers say that it will be the festival of human ingenuity. Expo 2020 goes well along with Dubai’s commitment to development in tourism and infrastructure. From the direct positive effects we can name stimulation of real estate market, boost of tourism and other branches of economy.

The first world Expo was dedicated to exposing invention of the Industrial Revolution in 1851 in London. It originates from the French tradition of organizing national expositions, showcasing… and overall direction to Industrialization (1851-1938), Cultural Exchange (1939-1987), National branding  (1988-nowdays). This tendency in national branding resulted in high investments in national pavilions. The statistics show that Expo 2000 in Hanover saw an average of 12 million E of investment. The question is always weather it is profitable and beneficial enough. Some of the positive examples, as Danish pavilion in the pomenutim show, show that profit can outweight the cost by 10 times. With the investment of 35 million and generated estimated 350 million revenue.

Dubai Expo 2020 is the first to be held in the Middle East and North Africa & South Asia region inhabited by 3.2 billion people, who previously had no access to World Exhibitions. But the construction boom will be held by the standards of sustainability. As they have the largest laboratory in the region that can test new materials, respecting the Green Building Regulations Guide.

Basic rules of World Expos are that it can be up to 6 months long, and has to introduce a theme that is relevant to whole humanity. So it has to be wide and universal enough. Dubai Expo 2020  selected the theme “Connecting Minds, Creating the Future”, sub-themes being Sustainability, Mobility and Opportunity.

It is interesting to notice the diversity of proposed themes.  Beside Russian proposition that would have been held in Yekaterinburg with the theme The Global Mind, and Turkish in Izmir New Routes to a Better World / Health for All, there was also Brazilian proposition of Expo in Sao Paolo with the theme Power of Diversity, Harmony for Growth. Dubai Expo will be all about sharing ideas and innovations, and encouraging collaboration It comes with the realization that development and progress are no longer based on technology, separated from the idea of collaboration and interconnection.

You may have missed

The benefits of window tinting