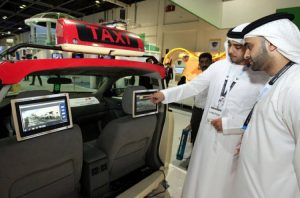 It is not an exaggeration to say – there is a taxi revolution going on in Dubai at the moment. The wildest futuristic products of fiction are just about to become real. SF and comix visions are there on the streets of Dubai at this very moment. Good news is that is a highly effective way of beating traffic jams.

The first news was that there are more than 1000 licensed taxis that are fully equipped with wi-fi and interactive touch screens. And that was just the beginning, as the Dubai Taxi Corporation plans an expansion of this number. Meanwhile, taxis with touch screens make possible to passenger to review its journey and give feedback on the driver.

But the real revolution is a flying taxi, that will be introduced in Dubai during the month of July 2017. This drone taxi will start flying around the city during summer, proving the futuristic dreams can come true. Each vehicle is actually self-driven, which leaves passenger only to communicate with the machine, designed to be secure. This pioneer project is challenging traffic jams, and so far known ways of moving through the city. Since transportation area is not just horizontal, but also vertical, this brings a enormous change into future of transport.

Calling a flying taxi actually became as simple entering the destination into an app. These flying devices are electric-powered, running up to 63 miles per hour. It can reach the destination of 31 miles carrying one person and luggage, all together weighing up to 100 kg.

The flight is not direct, but has to land on several spots. While landing, the propellers automatically fold and make it fit into just one car parking space. Being the first city in the world to introduce air taxis, Dubai will definitely provide precious basis for estimating the actual applicability in real urban environments. Drone taxis are of course equipped with fail safe system, which prevents any accidents. The navigating system makes the drone land in the nearest place if anything goes wrong. To prove that they were thinking about the safety, not just in a physical sense, the designers of the device made all communication go through encrypted channels.

The revolution is also in making transportation a solitary experience. Chatting with taxi drivers was one of the priceless experiences in our lives. Short, effective, moving through the city horizontally and vertically, could prove itself to be the perfect solution for overcrowded cities.

You may have missed

The benefits of window tinting